U of U forum sparks civil debate among supporters and opponents of Bear Ears monument designation. 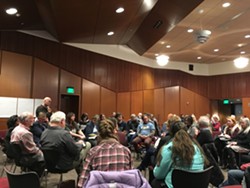 She, a San Juan County resident “born and raised”, enjoys a way of life on the land that includes hunting and recreating, traditions she shares with progeny. But Bayles Hancock worries these activities will be prohibited by the new designation.


“When it comes to access and hunting and grazing and collecting of herbs and so many other things that occur, there’s clearly no answers,” Bayles Hancock said, adding that this was one of many reasons she opposes it.


She spoke at a dialogue facilitated by the University of Utah College of Humanities. More than a dozen vested people sat in a circle and passed around a microphone, taking turns sharing their feelings and stories about the landscape and lifestyle on and around Cedar Mesa. An audience sat in chairs surrounding an inner circle.


In dire terms, Utah politicians have blasted the designation made by former President Barack Obama in late December. Many now are calling on President Donald Trump to take an unprecedented step in rescinding national monument status. Utah House Speaker Greg Hughes sponsored a resolution that asks for just that.


Whether Trump takes up that cause or not, the debate is sure to carry into perpetuity. Organizers of Thursday's dialogue, however, attempted to foster a conversation that was genteel and informative.


The tenor of the afternoon was softer than what has been heard at prior demonstrations, but the arguments were familiar: Those opposed to the designation were concerned about the size—about 1.35 million acres, and believe that a proclamation through the Antiquities Act discounted local opposition.


Those in favor of the monument said the state had failed to protect the region.


Participants complied with requests to engage and listen to each other with a kind—creating at times a cloying environment.


A speaker compared Obama’s proclamation to poetry, for example. Moderator David Derezotes, director of the college’s Peace and Conflicts Department, complimented another speaker for demonstrating that her willingness to listen to an opposing viewpoint. And during one stretch, the topic digressed from Bears Ears into a meta-conversation about the importance of civil dialogue.


“We’ve become so polarized and it’s so difficult to have these kinds of conversations. That’s why I appreciate this environment,” said State Sen. Evan Vickers, who added that he was probably the only guy in the room who voted for Trump.


The Bears Ears National Monument has a unique wrinkle in that it was initiated by a coalition of Native American tribes. Native participants were proud and heartened that the federal government listened to the tribal councils.


By the end of the event, neither side appeared to change the minds of the others. But that wasn’t the purpose, said Jeff McCarthy, Director of the Environmental Humanities program.


“A dialogue is about listening. It’s about understanding other perspectives,” he said. “And not about winning an argument or berating an opponent.”