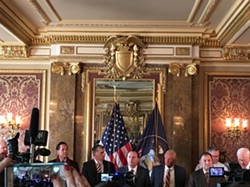 At the Utah State Capitol, a host of Utah luminaries spoke out against a possible Bears Ears National Monument, and with it a sweeping 1.9 million acre of protection. This press conference featured five of Utah’s six Congressional delegates, San Juan County Commissioners, legislators and statewide officeholders. Each came to the lectern in succession to make essentially the same claim: A national monument would be detrimental to the local communities.

Participants often spoke to President Barack Obama in second person, as if he were somewhere in the room among spectators, asking him not to designate the land during his remaining weeks in office.

San Juan County Commissioner Rebecca Benally spoke from the unique position as a Monticello local and a member of the Navajo Nation. The Inter-Tribal Coalition is backing the proposal and urged Obama to sign one last national monument designation.

Benally said, however, the federal government cannot be trusted to uphold deals it makes with tribal leaders.

“As a Native American, we understand what broken treaties mean and broken promises,” she said. “We’ve lived with it for the last 200 years.” She said her constituents view this as another example of federal overreach, she said.

If the president, through the Antiquities Act, creates a national monument, it can be expected that state leaders will push back with full force.

Sen. Orrin Hatch, R-Utah, said a Republican-controlled Congress with an incoming GOP president would work to override Obama. Utah Attorney General Sean Reyes said if the designation goes through, he is fixed to sue the government. “I won’t go into the specifics of the various legal arguments that we have,” he said. “But we have more than one.”

In the process, Bishop hopes to scale back or eliminate the Antiquities Act itself.

Several speakers said the state, not Washington, D.C., is better equipped to protect the land around Bears Ears.

But Bears Ears supporter Lee Badger finds this to be a nothing more than a convenient distraction.

“If they know the right way to do it, why hasn’t it been done?” he says. “The state has done nothing as far as I can see to protect those antiquities down there.”

Badger, an Ogden resident who has explored the region, also asks for caution when claiming the population of southern Utah is against a Bears Ears National Monument without scientific polling.

Wendy Black, though, a Blanding resident was among those in agreement with the governor and his cohorts. She said a designation would lock up acres of land that she and her family and friends visit to hunt and gather wood. She fears this will occur under a national monument designation because it will lead to road closures.

“They’re saying that everybody will still be able to get the wood, but you’re not going to be able to because they’ll block all those roads off,” she said.

Cheryl Walczak, also from the Ogden area, worries that without the protection that comes with a national monument label, the pristine countryside will be spoiled by extraction industries or privatized.

“It belongs to more than just the Republicans of Utah,” she said. “It belongs to a lot of people; it means a lot to many people.”

It is speculated Obama may announce a designation this week.